CD Changer Installation on MY2003 C2 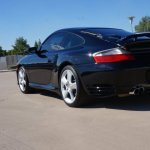